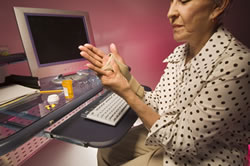 Many jobs require performing tasks that are repetitive or tasks that require heavy exertion.  While your body does become used to these tasks and strengthens in response, it is important to be aware of your body position and strains that can accumulate.

A good rule of thumb is to avoid using all of your strength for any task.  Make sure you can comfortably perform tasks including lifting, pushing, or pulling without straining yourself.  When you fully exert yourself, your body recruits additional muscles in order to maximize the force you can apply.  Additionally, your muscles and body position often deteriorate and place increased pressure on the ligaments of the joints.  In normal body movements; the ligaments help to guide movement of the joints; however, with poor posture the ligaments can end up bearing much of the force produced during body movement.

When increased pressure is placed on the ligaments, you will feel this as taking less effort as the ligaments don’t contract as the muscles do; however, the weight is still there and force on the joints is often increased due to leverage.

There are good habits to learn that can help reduce strain on your body with repetitive or heavy tasks.  Avoid twisting at the back when turning.  Some tasks that involve this motion include unloading boxes from a vehicle or moving items between tables.  Avoid bending at the back and make sure to squat when reaching for low items even when they don’t weigh much.

The core muscles of the body provide stability and rigidity to the spine during movement and activity.  This spine and rigidity decreases force on the ligaments and help prevent injury over time. Plank exercises are a good way to activate the core muscles and build strength.  To perform planks, lie face down, then lift your body up with your arms until you are resting with your forearms supporting on the ground.  Keep your body straight and make sure not to let your body sag in the back or shoulders.  Try to maintain this position for 60 seconds, but rest if you are tired, shaking, or can’t maintain proper form.

A Chiropractor can treat work injuries that can result from repetitive body movement or heavy work tasks.  Visit a chiropractic clinic if you have been injured with repetitive or heavy tasks at work.