The Uses and Benefits of Ultrasound Therapy 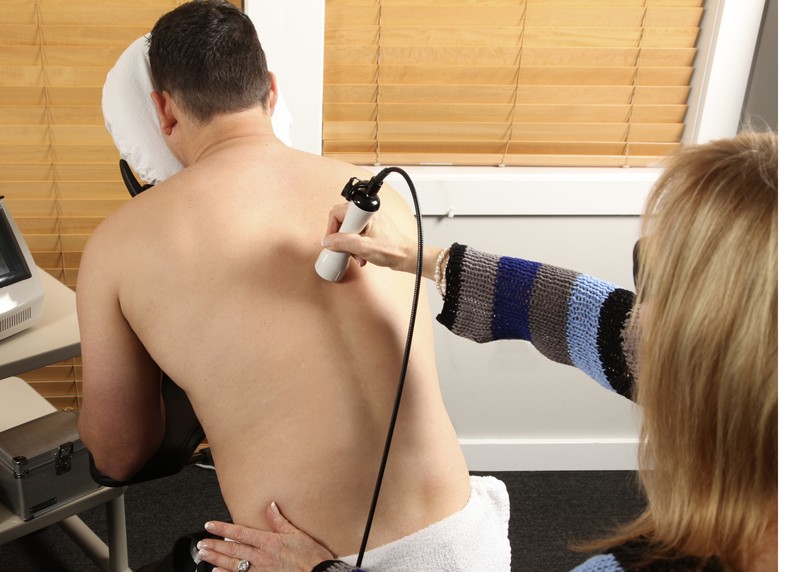 Most people have heard of ultrasound, because it is used so frequently by obstetricians to obtain visual images of a fetus developing in a pregnant woman’s uterus. But ultrasound technology is also effective therapeutically for the treatment of the painful soft tissue injuries that inevitably occur in motor vehicle collisions, work-related incidents, and other types of traumatic incidents as well.

By soft tissues, we mean primarily ligaments, which hold bones together, and muscles, which cross and move joints. When such tissues are injured, they go through three different stages of healing: 1) inflammation, 2) regeneration and repair (proliferation) and 3) remodeling. Ultrasound is a beneficial therapy in each of these three stages. Before reviewing these stages and the benefits of using ultrasound in each one, it’s helpful to know something about how ultrasound works.

The Stages of Healing and How Ultrasound Facilitates Progression through Them

When you injure muscles or ligaments, you typically don’t see direct evidence of the injury. However, you may see or feel indirect evidence such as swelling, redness, bruising, an increased perception of heat over the area of the injured tissue; and of course, pain.

Damage to soft tissues activates the release of a number of biochemicals that create what is known as an inflammatory response at and around the site of the injury. The inflammatory stage typically lasts about a week. People often think of inflammation as “bad,” but this is not really the case. Although inflammation is uncomfortable, it's also necessary, because it activates a cascade of biochemical events which resolve the inflammation and which also stimulate the next stage of healing--proliferation. It has been assumed in the past that ultrasound, at non-thermal intensities of 0.5 watts per square centimeter and pulsed at 20% of the continuous capacity for delivering US waves, is effective at reducing inflammation. However, studies have never supported this assumption. What studies do show, however, is that ultrasound therapy, using the appropriate settings, optimizes the inflammatory response, increasing the efficiency of this stage so that proliferation can begin as quickly as possible.

This is not meant to suggest that we shouldn’t attempt to exert some control over the inflammatory process, which, in the acute injury phase, can be excessive. Applying ice to an area of acute injury is often done for this reason. Icing reduces blood flow to an area, which helps reduce swelling. It also relieves pain.

The downside of this, however, is that if circulation is diminished, inflammatory cells of the immune system called macrophages don’t get to the damaged tissues as efficiently to release a hormone called IGF-1 (insulin-like growth factor), which helps the damaged tissues rebuild, repair, and heal. However, in clinical chiropractic care or physical therapy or physiatry, it’s often necessary to balance pain relief with the need to progress the patient through the stages of healing.

In the proliferation stage of the healing process, special cells secrete collagen, the protein that composes the structural foundation of many tissues. In response to injury of ligaments, muscles, and muscle tendons (the part of the muscle that attaches to bone), the collagen that is secreted forms scar tissue to re-establish structural integrity of the torn tissues. When low-dose, pulsed ultrasound therapy is delivered to target tissues during this phase of healing, it stimulates the cells that secrete the collagen fibers and optimizes the production of the scar tissue necessary to repair the damage created during injury (see Fig. 1). This stage can last up to four to six weeks.

Fig. 1. When tissues such as ligaments, muscles, and tendons sustain injuries, special cells secrete a protein called collagen that forms scar tissue to restore the structural integrity of the damaged tissue. Note that the scar tissue forms in random directions.

In the proliferative stage of healing, the scar tissue that forms is composed of collagen laid down in a more-or-less random pattern. It’s important to understand that when a scar forms in tissue such as a ligament, for example, the scar tissue doesn’t become ligamentous tissue. However, if rehabilitation is done properly, the scar will adopt the functional characteristics of the ligament. This is what happens in the remodeling stage, which can last as long as one to two years.

Fig. 2. In the remodeling stage of healing, scar tissue fibers become aligned along lines of stress, and the collagen that composes the fibers changes from Type III to Type I collagen.

Remodeling essentially involves making sure the scar tissue fibers are aligned along lines of stress (see Fig. 2), and changing the type of collagen fibers from the Type III collagen laid down initially to Type I collagen. Studies show that therapeutic ultrasound is capable of influencing the orientation of the scar tissue fibers and also stimulating the change from Type III to Type I collagen.

Ultrasound is such a useful therapy for helping to address damage to muscles and ligaments that occur in trauma such as motor vehicle collisions and work-related injuries, because it optimizes the body’s natural healing responses to such injuries.