Ligament Laxity in the Neck and Back 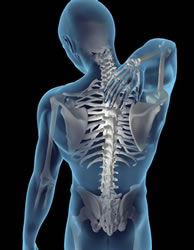 The ligaments of the joints are rope-like structures that help to control joint motion.  Laxity can occur when these ligaments are stretched to the point where they cannot contain motion to this normal, healthy range and movement beyond is allowed.  Symptoms of ligament laxity in the neck and spine may include pain, numbness, tingling, muscle spasms, or clicks with joint movement.

Ligaments can be injured and sprained both by quick, sudden events and long-term stress and strain. 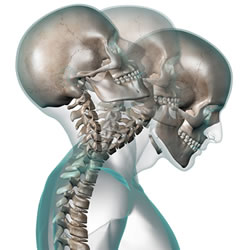 Sudden force, such as that applied during an auto accident, can quickly sprain many ligaments in the neck and back.  The classic whiplash pattern of injury involves multiple sprains throughout the neck as the head is whipped back and forth during a collision.  This type of neck sprain often results in the lordotic curve of the neck flattening.  Normally, the lordotic curves of the neck and low back help to absorb force and bring the center of mass rearward to align over the back.  When the lordotic curve of the neck flattens, this has the effect of bringing the neck forward, which brings the center of mass forward as well.  With the center of mass forward of the spine, force applied on the spine is increased with leverage.  Additionally, the muscles of the back have to apply increased force to counterbalance the leveraged force of gravity pulling the body forward.

A similar situation can occur with the low back, where the unrestrained pelvis moves against the restrained torso, producing sprains in the joints of the back.  This also often results in a flattened and decreased lumbar lordotic curve.

Another common sign of ligament injury in the neck and spine is decreased range of motion on x-ray images.  This is often visualized using flexion and extension x-ray images.  When the image sets are compared, individual joint restriction can be noted both in the flexion and extension directions.  This decreased motion at specific neck and back joint segments can suggest ligament damage that is being protected by active muscle contraction.

A more severe level of ligament damage can result in the ligaments stretching and allowing for translational movement of the vertebra.  This may occur and be seen on standard x-rays, but often this situation is better observed on the flexion and extension x-rays as these positions place increased shear or translational force on the vertebra.

The excessive joint motion that ligament laxity allows for leads to an increased chance of arthritis development.  This is particularly the case with laxity that allows for increased translational movement in the neck and back.

Translation of the vertebra can narrow the space for other structures in the neck and back, including the nerves that pass through the area.  The nerves exiting the spine at structures called intervertebral foramina (IVF), are particularly vulnerable, as space is limited in the IVF.  Bone spurs can occur around the IVF further limiting space for the nerve and increasing chances of compression.

Stretches can be helpful as well, particularly for ligament injuries that have been sustained with prolonged poor posture and body positions.  An example is slouching while sitting for prolonged periods.  Over time, this posture can lead to the head and shoulders becoming restricted in a forward position with restriction in the back when extending.  Stretches such as Bruegger’s relief position can be used to address this.  With the Bruegger’s stretch, the shoulders and upper back are stretched rearward with the chest lifted upward, restoring the curvatures of the neck and back and reversing the common slouched sitting position.

Severe cases of instability due to ligament laxity may require surgical stabilization.  However, surgical treatments are very invasive and conservative care with stretches, exercise, manipulation, and massage are typically tried before surgery is considered.

Our chiropractor will be able to instruct you in exercises and stretches that can help restore function when recovering from injuries or an auto accident that damage the ligaments of the neck and back.  Contact our chiropractic clinic either in SE Portland, or Beaverton, OR if you have been injured or are suffering from an auto accident.